Although Culbreath was elected because of his coaching accomplishments, it is

impossible to describe him without including his achievements on the track.

After winning the Pa. State championship in the hurdles as a high schooler and

dominating as a three-time Penn Relays hurdles champion, he embarked on a

storied college career at Morgan State. He was the national 400 meter outdoor

champion three times. After a stint in the U.S. Marine Corps, where he met Bill

Cosby and began a longtime friendship, Culbreath competed in the 1956 Olympic

Games in Melbourne and won a bronze medal. He added gold medals in the Pan-Am

Games in both Mexico and Chicago. After his competitive career ended he returned

to Norristown and became a teacher and coach. He moved to Central State

University in Ohio and built the team into a national powerhouse. He won 10 NAIA

Germantown Academy has had a storied basketball history. Sherri Retif’s

contributions to the girls basketball side of the ledger have no equal. After

Academy in New Orleans. After posting a 153-37 record and winning two city

championships she came north to Sun Valley High. In three seasons she captured

skills. She came to Germantown Academy in 1999 and for the next 14 seasons her

teams were nearly unbeatable. She compiled a 565-153 record and won 14

runner-up in 2012. Her Inter-Academic League Coaching record is a remarkable

was inducted into the Tulane University Hall of Fame in 1998, and selected to

the All-Quarter Century team in 2001.

Sandy wore a number of hats during her coaching career. Not only was she the

field hockey coach at Bishop Kenrick High, she was also the school’s athletic

director. In the summer she was a state-honored ASA softball coach. It was in

the field hockey world that she really made her mark. Taking over a program that

was far from legendary, she instigated an immediate turnaround. Kenrick had a

her tenure. Her teams won three Catholic League championships and had seven

Championships and captured a pair of Class-A State Championshisps.

Ursinus wrestling. His record of consistency is unmatched, never posting a

No other Ursinus coach, in any sport, has more victories than Racich. His teams

have won nine Centennial Conference championships, including five straight from

2002 to 2007. Since the inception of the Centennial Conference tournament, he

has coached more than 30 individual champions. While Racich has coached 15

every senior letter winner on his wrestling team has graduated from Ursinus.

MORE: Bill has been inducted into the Conshohocken Sports Hall of Fame (1986),

Those who remember the glory days of Suburban One football, when it was

considered to be the finest football conference in the state, remember Joe

Shumock. A transplant from Western Pennsylvania, where he began a storied

Shumock came east to Abington High in 1964. He left a 35-game win streak for the

the state. At Abington he compiled an 89-33-6 record, winning four Suburban One

championships and going undefeated in 1968 and 1969.  He was named the

of the year four more times at Abington High.  MORE: Joe Shumock was

1993, 18 years after he retired as head coach at Abington High School. Maybe it

took so long for the honor because he had retired as a coach at age 45, an age

when most legendary coaches are just getting warmed up. But by then, Shumock had

already spent 21 years as a football coach – exclusively as a head coach. He has

not looked back with regret. Shumock’s teams didn’t have many losses in those 21

years. There were 10 in four years at Shamokin Catholic, now named Lourdes

Catholic, where he was 12-10-1; only seven in five years at Bishop McCort in

A man whose name is synonymous with the Mt. Carmel American Legion

baseball program, Volpe is being honored posthumously for his work

in founding one of the more stable franchises in the area. Volpe

helped found both the Elmwood Park American Legion League and the

Mt. Carmel American Legion team in the 1960s. He ran both the team

and the league in those early days. The Elmood Park League changed

its name to the Greater Norristown American Legion, and it ran

separately with its rival league, the Upper Montco American Legion.

Volpe was instrumental in combining and merging the leagues in 1972,

forming the current league. In addition to running the business end

of Mt. Carmel American Legion, Volpe also was the first president of

the new Greater Norristown-Upper Montco League. He also devoted much

additional time to running bowling leagues in the area, as well as

other charity functions for Mt. Carmel.

In the sport of boys’ lacrosse, Gifford can truly be called a

pioneer. He was instrumental in championing the sport in its

formative years in Montgomery County. Gifford has straddled the

fence between volunteer coach and paid positions with area high

school programs – but his efforts as an organizer in the early

days outweighed all other achievements. He helped found the

nearby Crooked Crosse a few years earlier. Gifford, known for

his knowledge and skills as an offensive coordinator, has

coached at many levels. He was a highly-successful coach of the

Philadelphia U15 team that dominated at the national level in

the early-to-mid-2000s. Every time Gifford tries to step out of

the coaching limelight, he is dragged back in. After serving as

an assistant at Penn Charter for seven years, he was pulled out

of “retirement” to be offensive coordinator at Downingtown East

championship in 2007.  Three years ago he again was pulled

out of “retirement” to assist at Upper Dublin High, then moved

to Wissahickon High. All of these successful programs can be

traced back to Gifford’s work in the early years.

A longtime resident of Cheltenham, Schroeck has had baseball in

his blood for as long as he can remember. After the U.S. Navy

and college, Schroeck began as a player, playing for the

Cheltenham Jay-Vees, a semi-pro powerhouse in the Cheltenham

area. Even though he actually lived in Philadelphia, he played

for the Jay-Vees because of their strong reputation in sports.

He then became player-coach and never looked back. His tenure

covered many years in the Philadelphia Suburban League, then in

the ‘60s Schroeck became involved in the Pen-Del League. The

schedule usually involved about 40 games per season, plus

practices. For the better part of six decades, Schroeck found

were not covered by snow. When it snows, he follows his other

served as president of the Pen-Del League for 36 years. 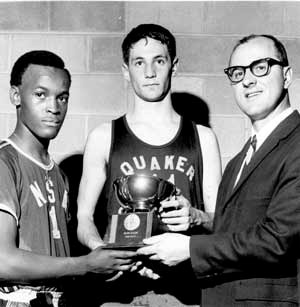 The late Albert Donofrio, driving force behind one of the oldest and largest

high school basketball tournaments in the country, will be honored with the

Lifetime Achievement Award by the Montgomery County Coaches Hall of Fame. The

Lifetime Achievement Award will be presented at the 12th annual induction

Donofrio, who died in 1976, was the former executive director of the Fellowship

House in Conshohocken. In addition to all of his duties, serving the youth of

the Conshohocken area, Donofrio also had a grand plan to bring some of the best

high school basketball in the country to his town. What started as three

Conshohocken area teams, playing in a round-robin tournament, blossomed into the

32-team single-elimination tournament that dominates the basketball scene every

year in late March and early April. It began as the Conshohocken Teenage

Basketball Classic in 1961 and was renamed the Albert C. Donofrio Classic after

his death. It is the oldest basketball tournament of its kind in the country.

professional basketball — more than half of that number playing in the NBA. Not

tournament, but Conshohocken has benefited from the notoriety the town has

received — locally, regionally and even nationally. His grand achievement,

bringing high level basketball to the Fellowship House, has lived throughout his

lifetime … and beyond it.